Te Runanganui o Ngāti Porou Chief Executive Officer Herewini Te Koha says the iwi and the airline have worked closely together for several years and are now formalising their partnership with a joint aspiration to see Tairāwhiti Gisborne and its people meet their potential.

"The agreement is significant from a commercial partnership perspective for Ngāti Porou. We see a real alignment of values between Ngāti Porou, Air New Zealand and its leadership," says Mr Te Koha.

Some of the key elements of the partnership that will be managed by Ngāti Porou Holding Company are:

"Through its partnership with Ngāti Porou the national airline is demonstrating that inclusive regional development and sustainable tourism are key aspects of its sustainability strategy. We are confident that by working more closely together we can drive tourism flows into Tairāwhiti and Turanganui a Kiwa, grow exports from our region and create more jobs. This will all help us to make the social and economic gains we want for Tairāwhiti."

Air New Zealand Chief Executive Officer Christopher Luxon says the agreement signing with Ngāti Porou opens a new chapter in the role that the airline can play in supporting the aspirations of iwi around the country.

"Ngāti Porou has been a fantastic partner over the past few years and we both believe that Tairāwhiti Gisborne is one of the jewels in the New Zealand tourism proposition that is yet to meet its potential. Alongside this the region is one of the key agricultural centres in New Zealand whether it be for its world-renowned wine, fishery or Manuka honey production. We are excited to be able to work with both Ngāti Porou and other local stakeholders in a coordinated way to create what promises to be an exciting new model for regional economic development," Mr Luxon says.

Mr Luxon and Mr Te Koha signed the Partnership Agreement at Whangara marae in front of Ngāti Porou representatives and the Air New Zealand Board, which is in Tairāwhiti-Gisborne meeting with stakeholders over two days. 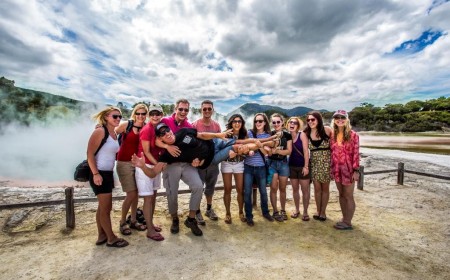